How to Grill Brats – the Perfect Beer Bratwurst Recipe 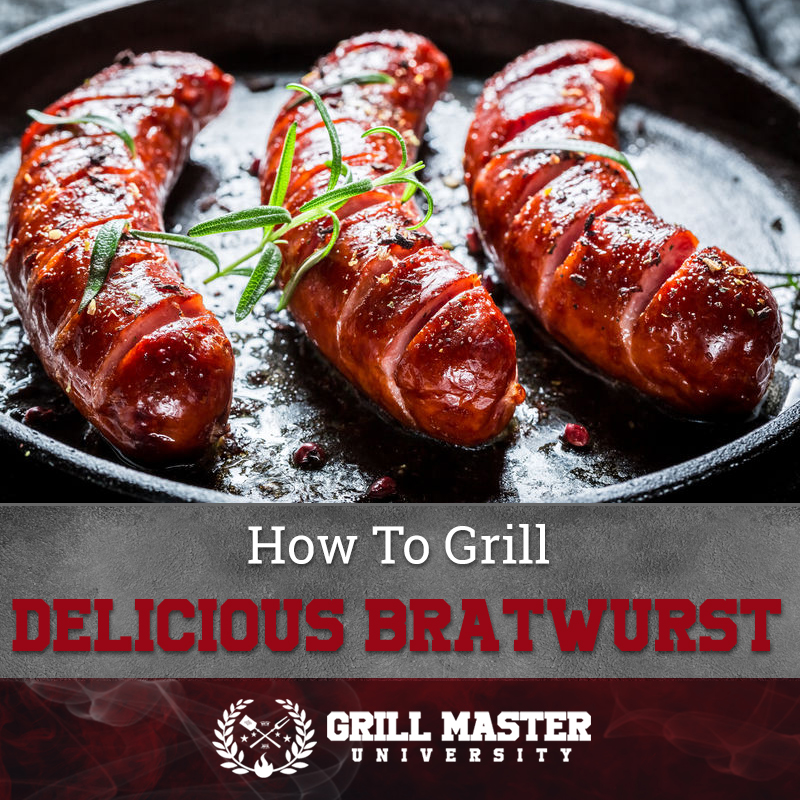 I must start this tutorial with letting you all know that I grew up in New Jersey, not Wisconsin. However, my father, with some minor German heritage, cooked breakfast every Sunday morning that included bratwurst. Our 1950s cooktop had a giant flat top in the center.

Dad would buy bratwurst when he did the grocery shopping on Saturday. We weren’t really sure what these sausages were. But, we looked forward to him splitting and grilling bratwurst on that hot flat top. The aroma was intoxicating. Dad ate his with mustard. We kids poured maple syrup over ours. Apparently that was pretty close to committing a food crime.

After college I made friends with someone who grew up in Wisconsin. My first trip with my friend to Wisconsin put me into a food coma with all the fresh brats, fish fries, cheese varieties, and great local beer. I am pretty sure I gained 10 pounds that week. It was worth it because I learned how to properly cook and serve a few iconic German dishes, including wursts, or sausages.

There is a large population of descendants of German settlers living in the Midwest. They really stick to their ancestral food traditions. Bratwurst and beer top that list of traditions. Bratwurst sausage recipes are commonly made with pork. The bratwurst my dad served was actually a blend of pork and veal, which I find absolutely delicious. You can find a wide variety of brats that have combinations of different meats and spices. The natural casings are commonly from hogs.

Grilling brats in New Jersey involved splitting them open like a butterfly and tossing them on a screaming hot flat top, cast iron skillet, or a charcoal grill. If you didn’t split them open they took way too long to cook. We didn’t know about pre-cooking brats in beer before grilling. When I witnessed this technique in Wisconsin, I was smitten. The brats were so juicy. And, the condiments and sides are given just as much attention to detail. You cannot waiver on the traditional accompaniments. Maple syrup is not cool, unless you are a 7 year old.

Many recipes will direct you to place the brats in a Dutch oven or cast iron skillet, cover them with beer, and boil them to oblivion. I learned from a family member who hails from Europe that the brats are best placed in a single layer in a roasting pan placed over 2 burners on your stove or on the grill. The beer is poured over the brats and brought to a low simmer. Patience results in a tastier end result. If you don’t have the space or time, feel free to submerge the brats in a pot of boiling beer until they are cooked through.

Pro tip #1: Don’t be afraid to use a good German beer for steaming the brats. You don’t need much. You can repurpose it to heat up sauerkraut for the main meal. If you are on a budget, any beer will work fine. PBR comes to mind, as it is a Midwestern staple.

This grilled bratwurst recipe has few ingredients. The bratwurst is the star of the dish. We have included recommended traditional condiments as part of the recipe. Preparation time is approximately 5 minutes. Total cooking time is between 30 and 35 minutes. This recipe will feed at 8 to 12 people, depending on how hungry everyone is. 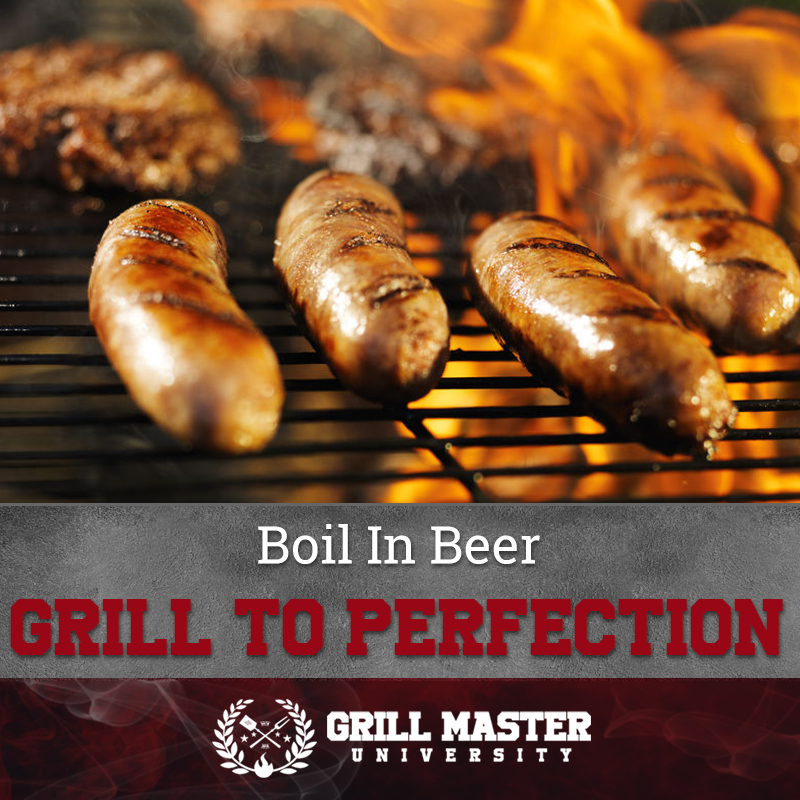 Step 2: Place the brats in a single layer in the warm roasting pan. Pour the beer over the brats. As soon as it comes to a very gentle boil, lower the heat so it stays at a low simmer. Cover the pan with aluminum foil. Simmer the brats for approximately 20 minutes until the juices are bubbling inside the casings.

Pro tip #2: Depending on the size of your roasting pan, you may have to add more beer.

Step 3: While the brats are simmering, set up your grill. Fill a charcoal chimney with briquettes. Place a loose wad of newspaper in the bottom of the chimney. Light the paper and allow the briquettes to become white with a red hot interior.

Step 4: When the coals are hot, empty them into the grill base and spread them evenly. Place the grill grate over the coals and wipe it down with a wad of paper towel that has been dipped in vegetable oil. Use your tongs for this.

Step 5: Using tongs, remove the brats from the beer bath to a large platter or baking dish. Leave the beer simmering. Place the bratwursts over the coals and grill for approximately 5 minutes, turning a couple of times to char all sides.

Pro tip #3: Do not use a fork when handling sausages. You don’t want to pierce the casings causing all those yummy juices leak out.

Step 6: While the brats are grilling, place the sauerkraut in the simmering beer just to warm it up. Remove this to a heatproof serving bowl and cover with foil.

Step 7: When the brats are cooked through, remove them to the beer bath to keep them warm. You can serve them right out of the pan. Or, just place them on a large platter and serve.

Step 8: Serve the brats with the rolls, onions and peppers, mustard, and sauerkraut. You might also want to serve a nice German style potato salad with a bacon vinaigrette. 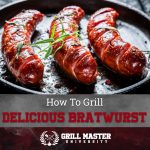 Bratwurst sausage recipes are commonly made with pork. Cooking bratwurst in beer ensures they will be cooked through when they hit the grill. It also adds a great deal of flavor. Finishing the brats off on a charcoal grill really takes them to the next level. 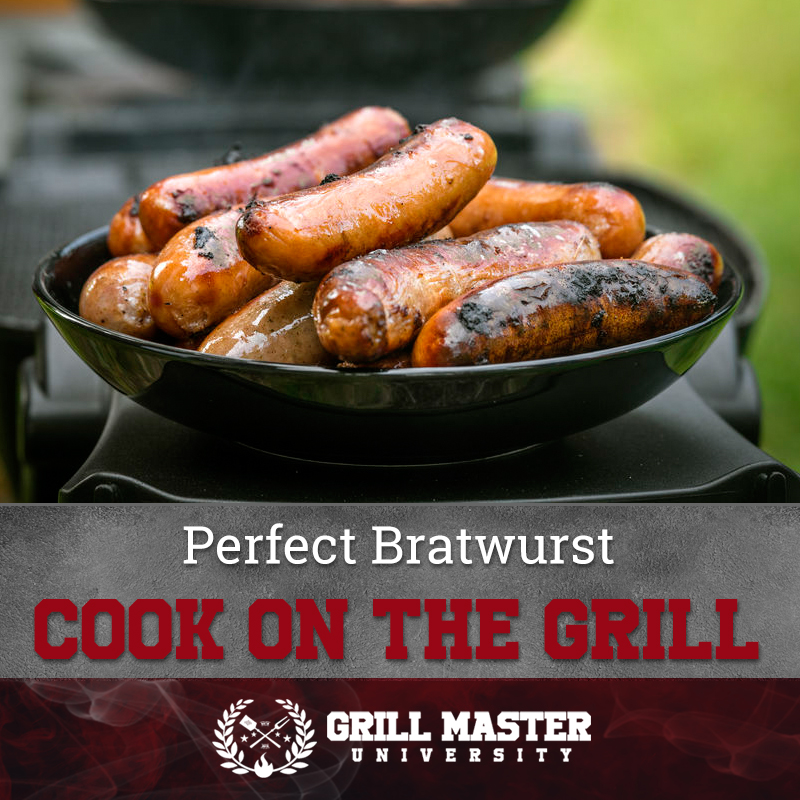 You definitely don’t have to be from Wisconsin to cook bratwurst perfectly. And, you certainly don’t have to go hunting for bratwurst at a specialty market. Most supermarkets around the country stock the meat case with a variety of brats. You can find, pork, veal, or beef brats. They are often flavored with different spices and other ingredients, such as caraway seeds, jalapeno peppers, or cheddar cheese.

Pre-cooking bratwurst in beer ensures they will be cooked through when they hit the grill. It also adds a great deal of flavor. Finishing the brats off on a charcoal grill really takes them to the next level. And, don’t worry about the kids, as the alcohol in the beer should cook out while the brats are simmering.

Enjoy your beer brats in buns with recommended, traditional condiments and sides. This recipe is terrific for feeding a crowd. You can even double it and grill the brats as needed. They can stay warm in the beer bath.

How do you grill uncooked brats?

Bratwurst is a fresh sausage, which means it’s raw and uncooked. You’ll need to cook it until it is no longer pink in the middle and reaches an internal temperature of 165 degrees Fahrenheit. It will take anywhere from 25 to 35 minutes, and you don’t want to burn the outsides before the insides cook through. We suggest simmering the brats for 20 minutes to gently cook them most of the way before popping them on the grill.

Should I boil brats before grilling?

Yes, we definitely suggest boiling brats before grilling them. If you throw them on the grill over high heat, you will get grill marks, but they won’t cook all the way through on the inside. Instead, simmer them for about 20 minutes and then put them on the grill to get your grill marks. Alternatively, you can cook brats in the oven or on indirect heat on the grill, but simmering them is much quicker.

How do you know when brats are done on the grill?

The best way to know when brats are finished cooking is to use a meat thermometer. When the probe reads 165 degrees Fahrenheit, the brats are cooked through and are safe to eat. You can also cut into a brat to make sure it doesn’t have any pink in the center, but cutting the bratwurst will release the juices, which can make the sausage taste dry.

What is traditionally served with bratwurst?

The most traditional accompaniments to bratwurst are German ingredients: whole-grain mustard and sauerkraut. Many people also serve brats with potato salad. We like eating brats on a bun, but you can also serve them with a fork and knife if you prefer.

Should you poke holes in bratwurst?

You never want to poke a hole in a brat. It’s a complete myth that you need to pierce the skin to prevent them from exploding. In fact, piercing a brat with a fork or knife will let all the juices escape, resulting in a dry sausage. Instead, gently turn the brats with a pair of tongs and do your best not to pierce the skin.