Types Of Pellets For A Traeger Grill 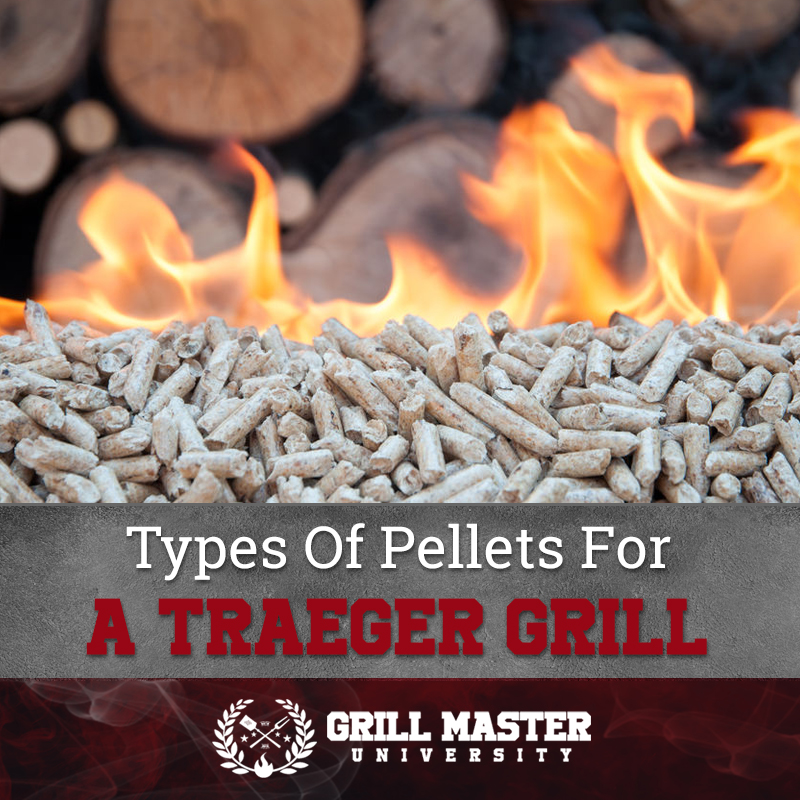 Pellet Grills have quite a significant number of advantages when compared to more standard grills and smokers, which is why they’ve started to become increasingly more popular over the past few years. This has led to more people considering switching over to them, although many people may not know enough about them to make the choice. This is especially true when it comes to which brand and type of wood pellets for a traeger they should use, which can often be somewhat of an overwhelming decision.

What Are Wood Pellets & How Are They Made?

The wood pellets typically used in these grills are created by compressing leftover sawdust from lumber mills, reducing the waste that’s usually associated with the industry. The process starts with the wood being shredded into small pieces before being compressed, which causes the lignin – a plant tissue’s natural polymer – to heat up and soften. For the cooking pellets to be shaped, they’re first passed through a small hole in a die, which compresses them. Once the compression is finished, the lignin starts to cool down, which acts as a natural gluing agent for the pellets. Once this has been done, the pellets are cut into an appropriate length before being packaged.

Though many people may believe that cooking pellets only come in a few tyoes, this isn’t the case as there is quite a variety to choose from, which is primarily driven by the different types of wood that are used in the process. Different woods can be better when it comes to bringing out the flavor of different meats, which means that you may want to have a few different types on hand. Oak is one of the more commonly used timbers, as it can help bring out the flavor in almost any meat, although this is best seen when blended with others.

Cherry has also been one of the more popular choices, thanks in large part to how effective it can be in bringing out the flavor in the majority of meats. On top of this, there are a few other kinds of wood for Traeger pellets that you can choose from, which work better with certain meats, including:

It should be noted that you can choose between 100% flavored wood or a blended mix, both of which can provide their own benefits. In the majority of cases, a blend will be much more affordable, although it offers less of a taste when you’re grilling. Most of these blends are a 70%/30% mix, with the majority being taken up by oak. This typically burns much better than the majority of other woods, although it contributes a taste of its own, which many of us may want to avoid. If you’re looking for a more premium taste, then it’s recommended that you choose a 100% flavored bag. For more information on wood and meat pairing, check out this Meat Smoking Guide. 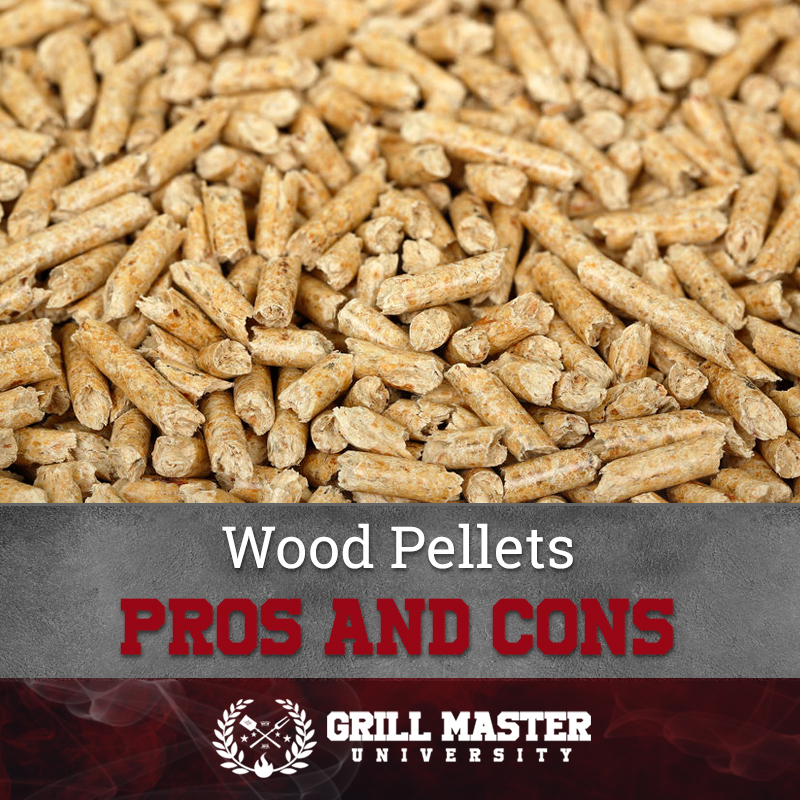 When compared to more traditional grills, cooking pellets can have a variety of advantages, with the first of these being that there’s quite a short amount of heat-up time needed to start cooking. This heat is also relatively constant, which provides an even cooking for meat, so you shouldn’t need to worry about under or over cooking different parts of the product. Cooking pellets can also be much easier to handle and clean up after, while also offering a variety of preparation options when you first set up your grill. Traeger pellets are also much safer than the likes of gas, which many people might want to consider when making their choice.

However, this doesn’t mean that wood pellets don’t come with a few disadvantages, with perhaps the most notable being that you might need to pay a significant amount for the pellets. This can be significantly affected by which types of pellets you’re purchasing, however, as well as how much of it you use regularly. Depending on what kind of grill you’re using, you might only be able to apply indirect heat to the food you’re cooking, which could mean that you might need to spend more time cooking them.

With the variety of cooking pellets that are available, spread across brands, flavors, and more, it’s natural to be confused when you’re thinking about where to start. However, there are a few different wood pellets that stand out from the crowd, for their own reasons. As such, they’re worth trying when you first start using a Trager pellet grill.

Despite being relatively new to the industry, these Cookinpellets have become incredibly popular. This is because the 40-pound bag includes four of the more popular types of wood pellet, with Hickory serving as its base. The mix also features Apple, Cherry, and Hard Maple, offering quite a flavored cooking experience. Furthermore, there’s no bark used in the pellets, meaning that you’ll be buying only high-quality heartwood that provides as much flavor as possible.

The blend can be an excellent introduction for many people who are starting to use a Traeger grill, as it offers a smoky taste that many people will find appealing. As it only comes in a 40-pound bag, however, it’s something that you’ll have to be a fan of to justify buying. 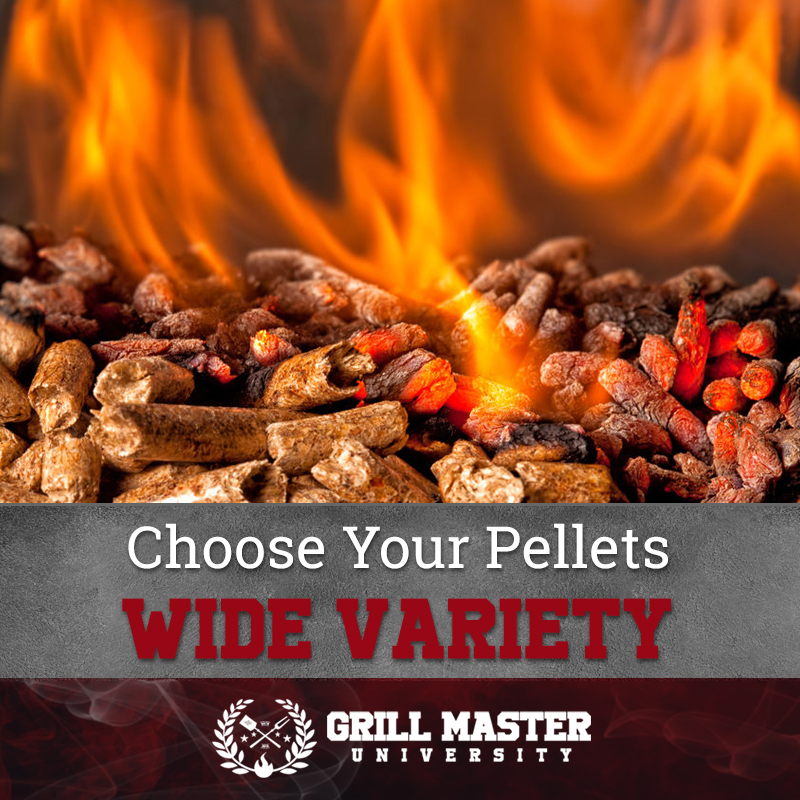 Cherry has often been one of the more popular choices for wood pellets, thanks in large part to the appealing flavor that it adds to meat, which can also be said of the oak that’s also used in this bag. This isn’t the only reason why these cooking pellets are recommended, however, as it offers a high cooking temperature, which means that you’ll be able to cook your food much faster. This burn is also relatively consistent, so you’ll be able to cook your food evenly.

A reduced amount of ash when compared to many other wood pellets, saving you a significant amount of cleaning time. However, it should be noted that this can be somewhat more expensive than many other products on the market.

This has been somewhat of a favorite in BBQ competitions, primarily because is offers a clean and hot burn when you’re cooking, which is driven by the fact that it has a lower moisture content than many other wood pellets. Being made out of two-thirds oak and the rest out of apple, it can be a practical choice for many products, although it may not be suitable for steaks or ribs. For a relatively quick cooking experience, however, it can be well recommended. Similar to the majority of other blends, it doesn’t have too much of an effect on flavor, which can be a positive or negative, depending on your outlook.

Hickory has always been a popular choice for cooking pellets because it offers a variety of quality burn properties, such as a reduced level of ash, consistent heat, and much more. This is something that these Traeger pellets look to replicate, although it’s typically made out of either alder or oak mixed with flavored oils. Many people shouldn’t notice the difference, however, and you’ll still see many of the benefits that hickory normally offers. Oak and alder tend to offer better burn qualities, so you’ll be seeing more advantages here than you would with a wood pellet that’s primarily made from hickory.

This is perhaps one of the more premium Traeger pellets to choose, as it features more flavored pellets than many other blends, with 40% being made up of apple while the remainder is made from red oak. This means that you’ll have a more intense flavor with any of the meats or foods that you’re cooking with it. However, there is the unfortunate drawback of the pellets featuring much more bark than many others, which means that there will be more ash created during the cooking process.

This can be an acceptable trade-off for many of us, as it means that you’ll see a real-wood flavor that can often be much more appealing to many people. In some cases, this could also mean that you might have to pay a little bit more for a bag. 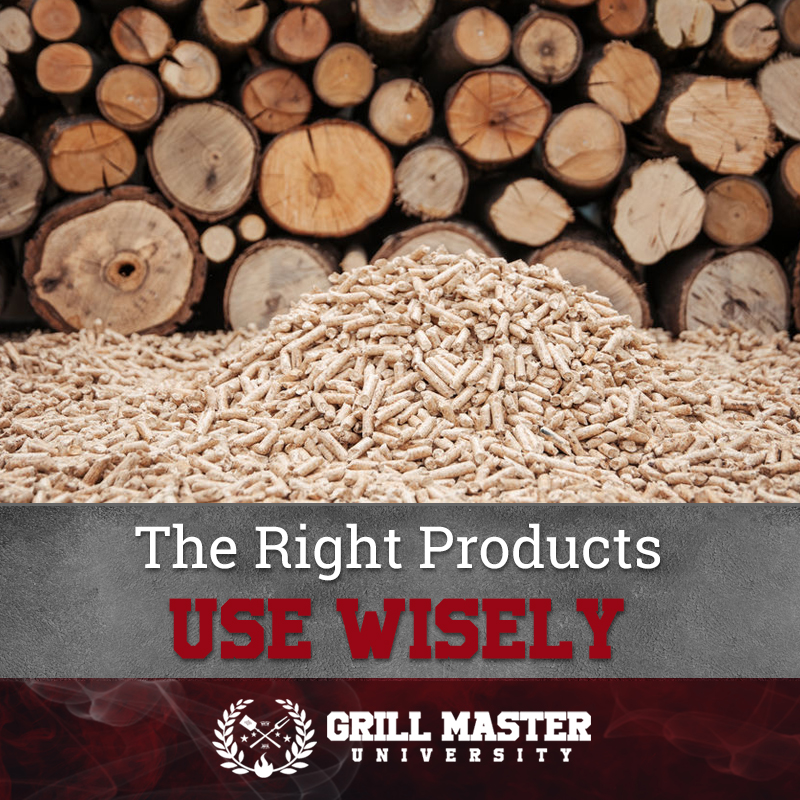 Grilling can be an experience that many of us might quickly fall in love with and become addicted to. To do so, however, you’ll need to ensure that you’re using the right products for you. It’s recommended that you try experimenting with a few different cooking pellets, as you’ll then be able to find the right blend for you. As we mentioned above, certain woods can be better with different meats, so this should be something that plays a considerable factor in your decision.