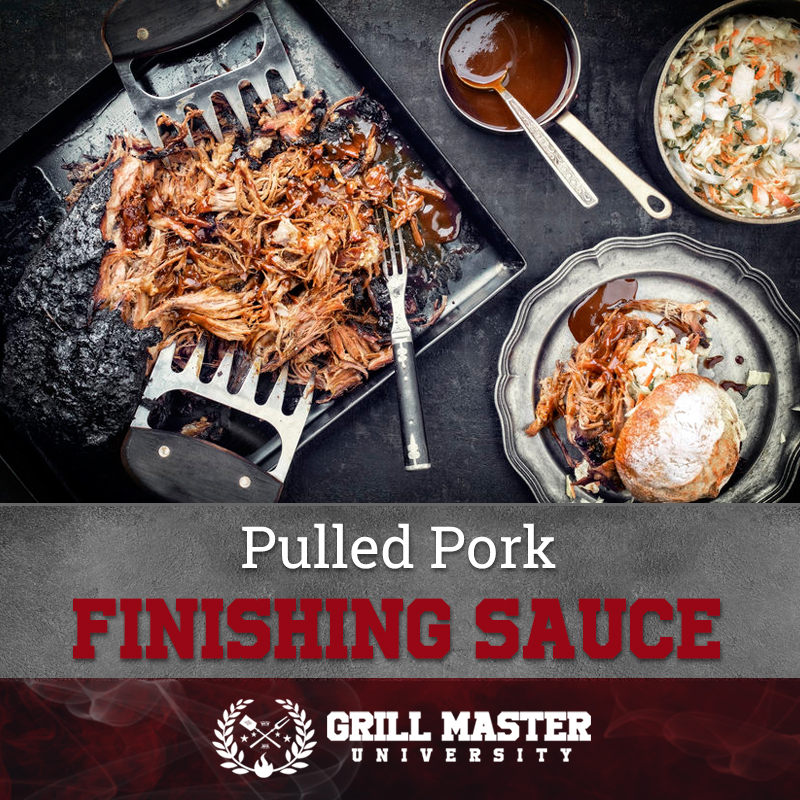 Pulled Pork is one of the most popular pork-based dishes in the United States.

Originated in the Southern region of the U.S.A, this staple of sweet and savory goodness consists of slow-cooking a pork shoulder at low, indirect heat. Using this method helps the meat preserve its natural juice and tenderness.

Once cooked and pulled, using Cave Tools Pulled Pork Shredder Rakes, the meat is rich and saturated enough to pull apart with the help of meat claws, or even with fork and knife.

The result is a generous portion of meaty, juicy, tender, smoky strings of pork that can be mixed with a finishing sauce to create a delicious plate.

Contrary to what its name may imply, a “finishing sauce” refers to any kind of sauce used on dishes either during or after the cooking process.

This said, any sauce that is added to food after the dish is served is considered a “finishing sauce.”

Now, in the case of pulled pork, paying close attention to the confection of the finishing sauce is just as important as the rest of the cooking process. There are region-wide competitions dedicated to finding the perfect finishing sauce for pulled pork. It is kind of a big deal!

This is because the finishing sauce can change the entire essence of the plate. Even though pulled pork is typically smoky and delicious enough to eat on its own, the sauce will bring an entirely new dimension of punch and flavor that is unequal to any other Southern BBQ dish. 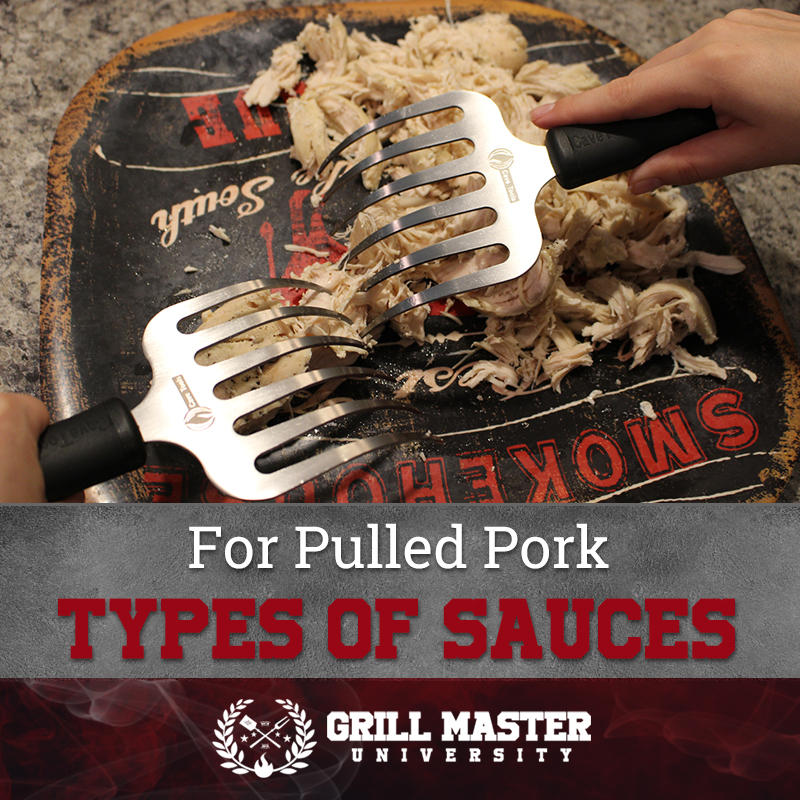 Types of Pulled Pork Finishing Sauces and How to Make Them

Finishing sauces for pulled pork are as varied as they are interesting. Like BBQ sauce, pulled pork finishing sauce recipes include cultural and regional variations that represent the people who worked so very hard every day trying to make something truly extraordinary.

Here are some of the most popular pulled pork finishing sauce recipes:

Mayo-Horseradish based finishing sauces- This refers to the famous Big Bob Gibson’s Alabama White Sauce, originally from Decatur, AL. This sauce gives a savory-buttery finish to pulled pork to satisfy those fans who aren’t too much into the “sweet stuff.”

As a zero-sugar based sauce, this option is great for keto dieters.

Nashville, TN boasts a similar sauce that they also call “white,” but is actually a blush-like color. The reason for this is the addition of cayenne pepper and paprika to make them different. However, the Alabama White Sauce tradition is quite strong in the South as well, earning it its very own spot in the sauce hall of fame.

Molasses-based finishing sauce- This is perhaps one of the most popular pulled pork finishing sauce recipes, without a doubt. How could it not be? It is smoky, sticky, thick, sweet, and delicious. Its sweet and tangy flavor begs you to go back for seconds with its finger licking goodness. Think BBQ sauce on steroids.

We chose to focus on this recipe because it is quite delicious and rich. As such, you still need to keep some balance among all the ingredients. This way, the sauce won’t turn out too overpoweringly sweet, or sticky.

Here are the ingredients you will need for ONE CUP of molasses-based pulled pork finishing sauce. Double up as you go, for more sauce. 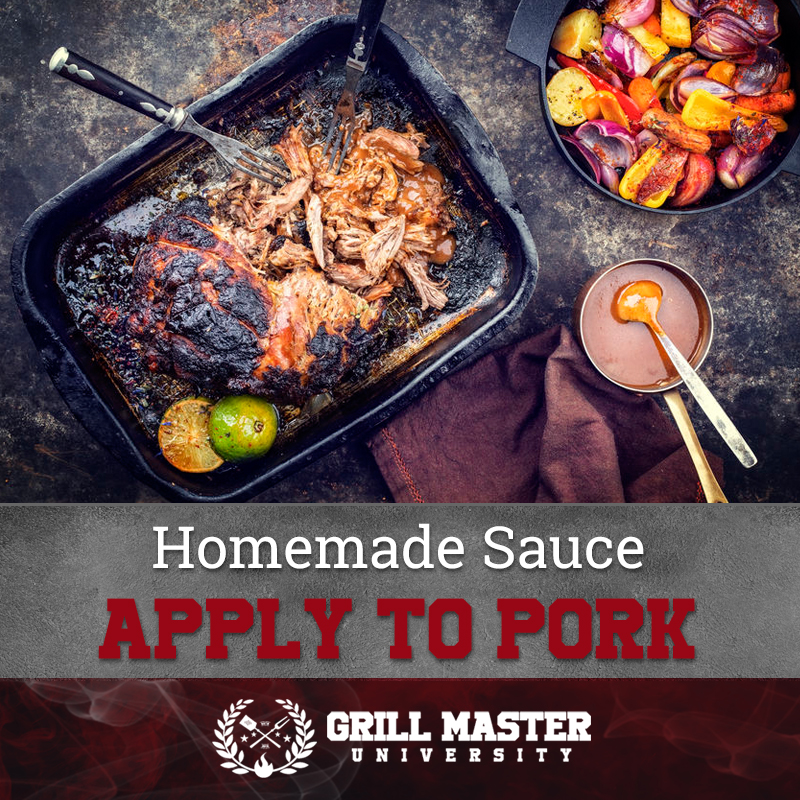 -Get a mixing bowl and combine all the ingredients. Mix thoroughly.

-Add all ingredients to a saucepan. Bring to a boil, and then reduce to low heat. Simmer for about 10 minutes.

-Apply the sauce to the pulled pork while it is still warm, after cooking. Mix through, and keep another batch for when you come for seconds. Believe us, you will need it.

How to serve a balanced plate with pulled pork and finishing sauce?

For this recipe, we went all the way to the top of the range in the “sweet and tangy” category. We believe this is the world’s favorite way to eat BBQ, due to its sweetness and finger licking stickiness.

This said, you want to pair a pulled pork sweet BBQ plate with foods of the exact opposite flavor. This will not take away the star status of the pulled pork flavor.

Also, try not to bulk up too much on starchy side dishes so that you can save room for more meat! We were born carnivores for a good reason!

Here are some light, fresh and savory ideas:

Pair sweet pulled pork with a refreshing drink to cleanse your palate in between bites: 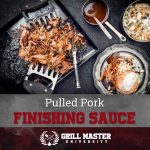 Pulled pork is typically smoky and delicious enough to eat on its own, the sauce will bring an entirely new dimension of punch and flavor that is unequal to any other Southern BBQ dish. 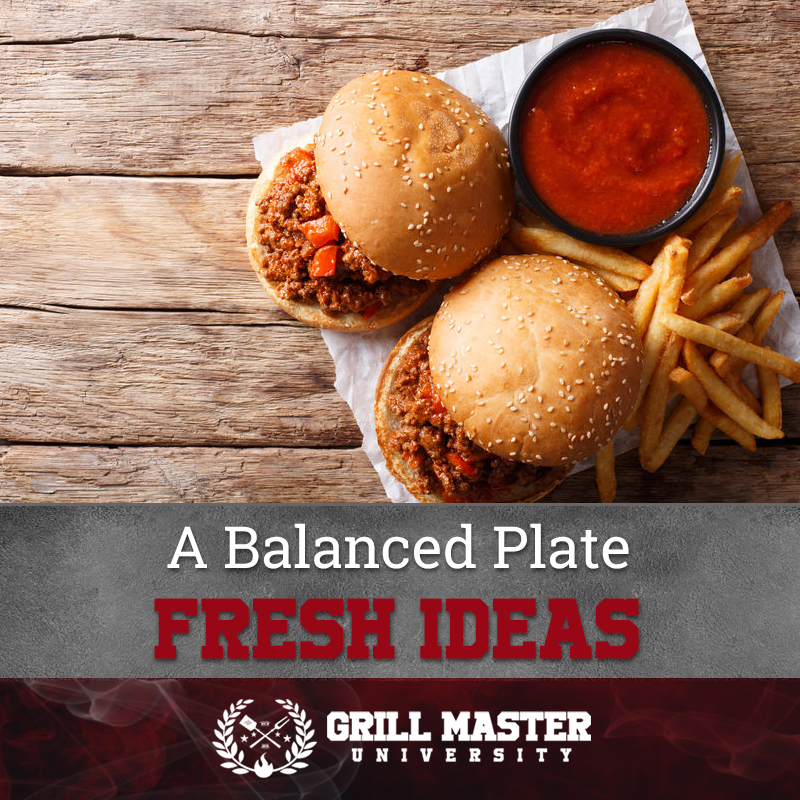 Pulled pork is a go-to meal that is as fun to make as it is to eat. Slow roasting the pork shoulder to perfection is relaxing and so worth it. You get enough food to feed a whole family, but they you also get the chance to play around with the different flavors you want to use on your pork.

Whether you go Carolina-based, Alabama-based, sweet, savory, or traditional BBQ, pulled pork will give you the best meat to experiment with, at zero risk. The meat itself is delicious on its own. What you bring to the recipe is a very welcomed extra! Do you have a favorite pulled pork finishing sauce recipe?