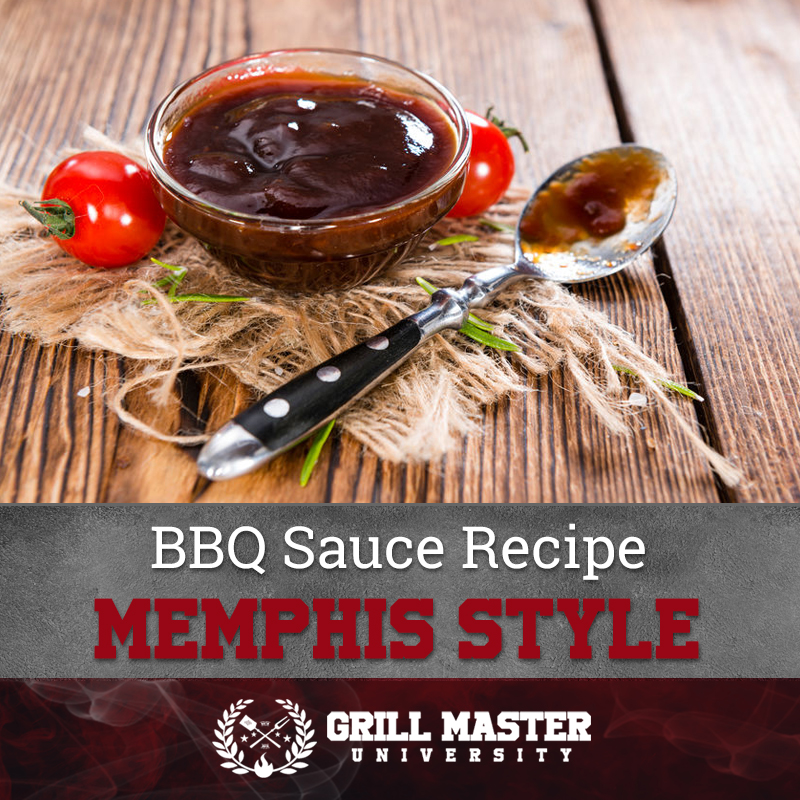 Our United States of America is a nation where an amalgamation of people, cultures, beliefs, and dreams somehow seem to work together, especially, in the kitchen!

Our culinary tastes are, perhaps, the best testament to our diversity. This is because our food choices do not only vary from culture to culture but from region to region, and even from state to state. That should not be too surprising, after all, there are 50 huge states containing all kinds of interesting people from all walks of life; we are a pretty big nation!

Yet, as big a nation as we are, We The People, seem to have reached a consensus: We love good barbecue (BBQ).

Grill and pit masters across the U.S.A can identify at least 12 variations of BBQ sauce that are used by regions. These regions house the states of Alabama, Baltimore (horseradish-based sauces), the Carolinas (North, South, East, and West are all different), Florida, (Citrus-based products with Caribbean influences,) Kentucky, Mississippi, Missouri, Tennessee, and Texas.

-The sources of these varieties are obviously related to where the region is located, as well as:

-The type of crops produced in the region (vegetable, spices)

-The weather and temperature of the region

-The choice of meats used for BBQ

-The regional activity level for BBQ and pitmaster competitions- the more competitive, the more creative folks get.

Even if we split our BBQ tastes into a dozen regions, we still have four bases that make up those sauces. The add-ons are part of the creativity process.

All BBQ sauces are made of one of these foundations

Tomato-based sauces: This is the most popular BBQ sauce. Ketchup (the tomato base) is usually mixed with molasses, brown sugar, Worcestershire sauce, soy sauce, and even honey. The Kansas City style sauce, Memphis, St. Louis, and Texas are mainly tomato-based.

Vinegar-based sauces: This type of sauce is mainly based on apple cider vinegar, and it is primarily used to marinate meats. Molasses, cayenne pepper, brown sugar, and even a bit of ketchup, could be added to some variations. This is the sauce base of choice for the Carolinas.

Mayonnaise-based sauces: These sauces are not just mayonnaise, but they are also laced with horseradish, lemon juice, vinegar, and much more. Alabama and Tennessee both have popular white BBQ sauces that are quite rich and savory. These sauces contain no sugar.

Mustard-based sauces: Here come the Carolinas again. Since all four regions of the Carolinas like to experiment with their BBQ, it is safe to say that one side is tomato-based, another side is vinegar-based, and then there is the mustard-based side. The South Carolina mustard-based BBQ is popular with pulled pork sandwiches and plates.

Which one is best? For the sake of this tutorial, we will go with what is perhaps the most widely-used BBQ sauce in U.S.A: The tomato-molasses-based Memphis BBQ sauce.

Why even use BBQ sauce?

Memphis BBQ sauce, as well as its “sister” sauces used in Kansas City, St, Louis, and Texas, feature a bold, hickory flavor, a thick and sticky base, sweet flavor, and a smoky and fruity aroma.

The best part is that Memphis BBQ sauce works as glaze and coating to preserve the natural juices and flavors of the meat. All the sauce does in enhance the meat and make it even more addictive to eat. For this reason, the moment you think “BBQ,” your mind may take you to an image of a deep, mahogany-colored, thick, sweet sauce poured loosely over a delicious portion of juicy, smoked meat.

When used during the cooking process, BBQ sauce is “mopped” onto the meat using a baster, brush, or BBQ mop, as it is properly called. In the process of barbecuing, the meat is meant to be cooked slowly and on indirect heat. Therefore, as the meat reaches its perfect internal temperature, you can work on its surface by creating a crispy glaze with the BBQ sauce. This crunchy outside texture will, in turn, protect the tenderness and juiciness of the inside of the meat.

Once the meat is cooked, what could be better than to double dip the meat in BBQ sauce goodness making it wet in every nook and cranny. It makes for a sloppy and delicious “messy” plate that everyone will enjoy. 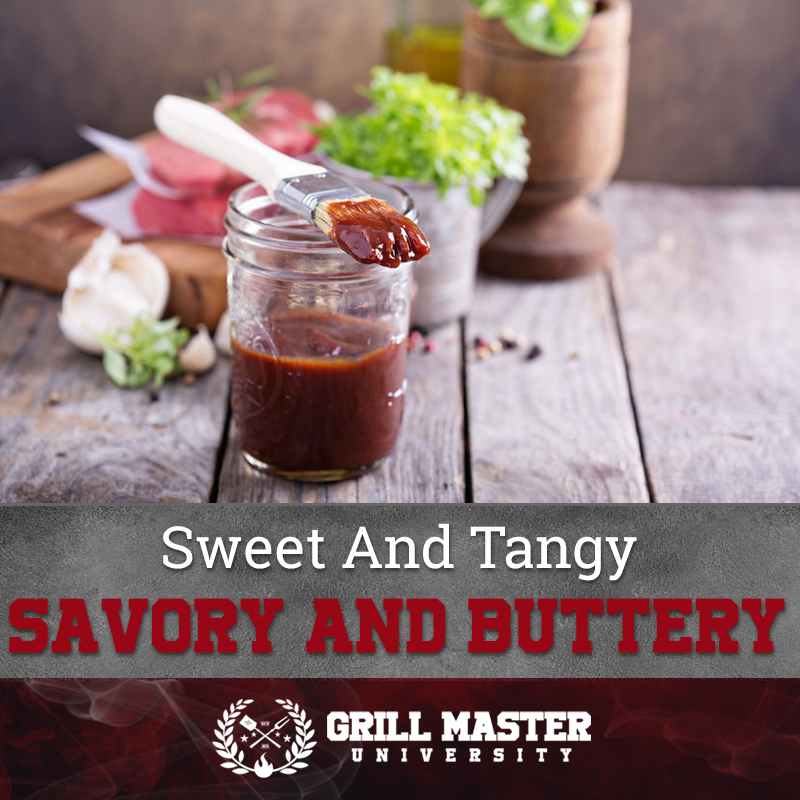 Not sure which sauce to get?

Tangy and Smoky– Vinegar- based BBQ sauces from the Carolinas.

Savory and Buttery– Mayonnaise/ Horseradish-based sauces such as the Alabama and Tennessee (Nashville) White sauces.

Memphis BBQ Sauce - All You Need to Succeed

After combining all ingredients, and whisking enough to mix them well, add them to a saucepan.

This sauce is best eaten warm. All ingredients will have a different consistency and water content that gets released upon cooking. All of this becomes balanced after you heat up all the ingredients over medium-low heat.

Keep stirring for 10 minutes on low heat. Immediately remove the sauce from the heat and let it cool in a separate container. Refrigerate the sauce if not using right away. Reheat upon using.

Memphis BBQ Sauce is sweet, sticky, and smokey. Pair your Memphis BBQ plate with a side dish of a mild flavor that does not distract from the key ingredient.

Potato salad, macaroni salad, roasted seasonal vegetables, and black beans are great choices that won’t detour your taste buds from the sweetness of the BBQ sauce. 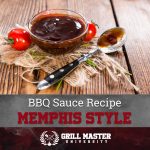 Memphis BBQ sauce works as glaze and coating to preserve the natural juices and flavors of the meat. All the sauce does in enhance the meat and make it even more addictive to eat. 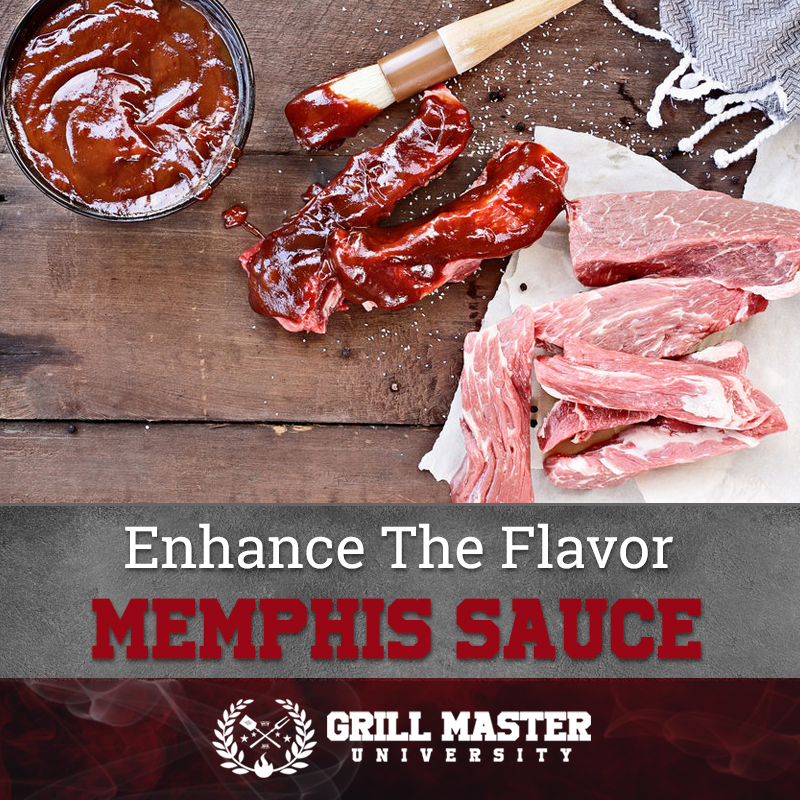 Out of all four BBQ sauce styles, there is no doubt that Americans have a go-to flavor: the tomato-based, molasses-sweet, sticky BBQ sauce that is so delicious and addictive.

An example of one of these sauces is the Memphis BBQ sauce recipe, which calls for a number of very heavily-flavored ingredients including mustard, ketchup, Worcestershire sauce, brown sugar, and vinegar.

You can imagine the powerful flavors that a combination like this can bring out. Are you ready to try it yourself? What is your favorite BBQ sauce recipe?